Images Of Our Lady In Body And Soul

When you visit Our Lady of Perpetual Help, you will notice four mosaics gracing the outdoor walkway from the parking lot. These images of Our Lady are meant to draw us into the experience of prayer and to put us into the mindset of worship. Icons similar to these mosaics have been venerated since the early days of the Church.

An icon is more than a portrait of Christ, Mary, or one of the saints. A portrait portrays a person’s body as it is on earth and tries to show as much as possible how that person looked. An icon, on the other hand, is a window that draws us into contemplation of God and heaven while it makes those realities present to us. Icons are objects of prayer, not worship, because they focus our mind on what God has accomplished through his saints. As you walk past these beautiful images of Mary, pray with them; allow them to draw you into a deeper contemplation of her “Yes” to God, so that as His disciples we might say our own “Yes” and enter into a deeper relationship with Him.

Our Lady Of Sorrows

This icon of the Blessed Virgin depicts Mary under the title, Our Lady of Sorrows or, in Latin, Mater Dolorosa (Mother of Tears). Popular in both Eastern and Western Christianity, the image has a long tradition of veneration in both Churches.

The icon depicts Mary with a dejected, yet contemplative look on her face, her hands clasped in prayer. Piercing her heart are swords, representative of the sorrows that she faced as she saw her son, Jesus, rejected and killed. The image of swords hearkens back to Simeon's prophecy that we read in St. Luke’s Gospel - “a sword will pierce through your own soul also, that thoughts out of many hearts may be revealed,” - which foreshadows the difficulty of Mary’s role as Mother of God.

In contemplating the image of Our Lady of Sorrows, we are drawn to the intercessory role that Mary plays in our lives. She is a refuge for those who have suffered, and she walks alongside us in our trials because she knows what it is to suffer heartache and loss. In the Eastern Tradition, we also pray for those who cause others to suffer, that God might turn their hearts to the good: "Rejoice, much-sorrowing Mother of God, turn our sorrows into joy and soften the hearts of evil men!" goes the Orthodox refrain. We too might echo that refrain as we observe the suffering in our world caused by evil desires. 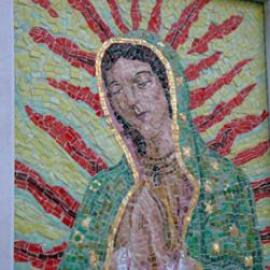 Our Lady Of Guadalupe

This is an image familiar to many of our parishioners and almost anyone of a Mexican background. She is the Patroness of the Americas as declared by Blessed John Paul II.

The story of the image is fascinating. In the year 1531, not long after the Spanish conquest of Mexico, Juan Diego, a native peasant, was making his way to Mass when he noticed a beautiful girl on the hill of Tepeyac outside Mexico City. She asked him to go to the bishop and request that a Church be built in that location.  Juan was unconvinced of his worthiness but after several days was given a sign to take to the bishop.  On December 12, he gathered roses growing at the site in the folds of his tilma (a peasant’s cloak) to show the bishop. As the flowers fell at the bishop’s feet, an image was impressed on his tilma: it was the woman with whom he’d been talking, the Blessed Virgin Mary.

The image of Our Lady that was on the tilma is reproduced in our walkway. Mary has the darker skin of the native people and is dressed like them. She wears a black sash around her waist, a traditional sign in the Nahuatl culture that she is with child. She smiles kindly on Juan Diego and on all of us.  Studies of St. Juan Diego’s tilma confirm its miraculous nature and reveal many more details that escape the naked eye. For instance, in the Virgin’s eye you can see a reflection of the bishop surrounded by his priests as it would have been on the day Juan Diego took the roses to Mexico City. The stars on her veil reflect the sky that early morning on December 12.

After the miracle at Tepeyac, most of the population of Mexico converted to Catholicism. She is an image dear to the hearts of missionaries and holds a special place for us here in the Americas. May Our Lady of Guadalupe always remind us of our special calling as God’s children, called to evangelize the world for her son. 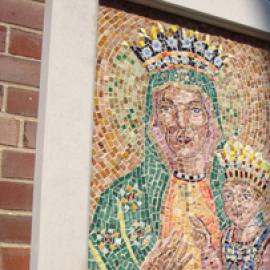 The icon of Our Lady of Czestochowa (pronounced “chest-ah-hova”) is a re-creation of the original icon that resides in the Jasna Gora Monastery in Czestochowa, Poland. She is sometimes called the Black Madonna because of the darkness of the image which is a result of the soot of so many millions of candles burned in her honor near the icon.

Popular tradition holds that this icon was originally painted by St. Luke the Evangelist and the first iconographer on the table top of the Holy Family. The icon is then said to have made its way from Jerusalem, through Constantinople and the Balkans, finally coming to rest at its present location in Poland, bestowing many blessings and miracles along its way. It is attributed with saving the monastery during a Swedish invasion of the seventeenth century. For this service, the image was “crowned” Queen of Poland and is revered for her special protection to this day.

Czestochowa remains the most popular pilgrimage site in Poland. The image itself is of Mary under the title, “One who shows the way.” Though she looks directly at us, her hand gestures towards the Christ-child pointing out to us the way to salvation. She is crowned as Queen of Heaven while Jesus is crowned as King. Christ extends his hand in blessing, bestowing his peace upon us. Our Lady of Czestochowa is an image of hope, and one that we can pray to in our moments of need, allowing Mary to lead us always to her son.

Our Lady Of Perpetual Help

Our Lady of Perpetual Help is the patroness of our parish and holds a special place in our prayers. The icon depicts Mary comforting the child Jesus who is frightened by the implements of his death. In the traditional icon, we see the Cross on which Jesus would hang and the spear that would be thrust into his side. Although this mosaic does not depict these symbols, the tapestry that hangs in our church does. The fallen sandal illustrates Jesus’ fear. Mary is clothed in blue representing her perpetual virginity throughout her life.

The legend goes that this was the first icon ever made. St. Luke was said to have painted it during Mary’s lifetime and that she gave it a special blessing during her life. It is also said to have spent some time in the city of Constantinople, protecting that city from constant invasion and threats. However, it is more likely that this icon was written sometime in the early middle ages on the island of Crete, a prominent place for iconography and religious art. It is first recognized in the western world around the year 1499 in Rome where it rested in one of the churches of that city, having been brought there by an Italian merchant. One appearance of Mary and many miracles have been attributed to this image down through the centuries. It currently rests in the Redemptorist Church of St. Alphonsus in Rome having been given to their care by Pope Pius IX.

The image here is one of comfort. Mary is the gentle Mother who comforts her children in their time of need. Turn to Mary when your heart is troubled and you will be comforted. Seek her intercession for all those who are in need of heavenly help and you will find a gentle Mother. Our Lady of Perpetual Help, pray for us.

Our Lady of Perpetual Help Catholic Parish is a family of believers in Christ who strive to live according to his teachings. We take as our mission in the world living out the Gospel of Jesus.

Prayer to Our Lady of Perpetual Help

Watch over us and take care of us. As you held Jesus in your arms, so take each one of us and our parish in your arms. Be a mother at every moment to help us. Our Lady, we beg your help in the problems of daily life. Keep us close to your Son and His way. We ask this through Christ our Lord.